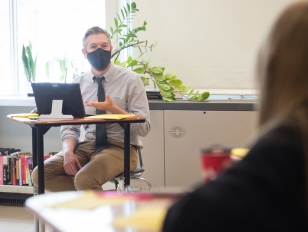 After spending 15 years as a journalist and art critic, graduate student Colin Dabkowski decided he needed a change. Dabkowski, who worked at the Buffalo News for nearly 13 years, wanted a career that aligned with his values as a journalist. He decided to get into education, and now he teaches at Alden High School while working toward a master’s degree in English education at Buffalo State College.

“I’ve had my eye on education for a long time, because I consider journalism education,” Dabkowski said. “This job, teaching, is just journalism for a smaller audience.”

It’s no secret that the newspaper industry has undergone significant changes over the last 30 years, and journalism jobs are hard to come by and even harder to keep. Dabkowski had a front-row seat for the sea changes the industry has undergone, and making the change to teaching made sense to him, both philosophically and practically.

“It didn’t seem like too much of a leap for me to go from newspaper reporting, which is distilling complex concepts and information into an understandable form for an audience of varying reading levels and abilities,” he said. “That’s what teaching is, distilling complicated information and presenting it in a way that it can be taken and put into action by students.”

Dabkowski, who earned a B.A. in magazine journalism from Syracuse University, had strong opinions on what English education should look like and how teaching should be done. When he first attended Buffalo State for the English education postbaccalaureate teacher certification program in 2018, he said, he was blown away by what the college was offering.

“I spent a long time living a mile and a half from Buff State without realizing that they had an English education department that was so closely aligned with my beliefs about education,” he said. “The department was promoting ideas I had deeply believed for years, and had a view of education that I couldn’t have hoped for in my wildest dreams.”

“I walked into my first English ed class and met Jim and Kristin, and it was like, What is this?” he said. “This is the most amazing thing ever. I felt like they were preaching to the choir. They got me fired up and really excited.”

They also got Dabkowski into a classroom early on, giving him hands-on experience right away.

“It’s the perfect balance of solid research foundation, hands-on classroom experience, and mentorship opportunities,” he said. “In my mind, why would I go anywhere else? It’s just an incredible resource.”

Dabkowski is now in his first year at Alden High School, where he teaches English, creative writing, and multimedia production to a mix of ninth- through 12th-graders. On a recent Wednesday afternoon, his students were listening to podcasts they had produced and giving each other feedback. Dabkowski offered his own constructive comments when necessary but was clearly enjoying his role. He said it wasn’t easy leaving the world of journalism to embark on a new career, but now that he’s making his way, he couldn’t be happier.

“I have absolutely no regrets,” he said.