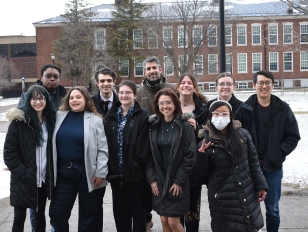 Buffalo State College’s Mock Trial Teams wrapped up their season February 26-27 at the “Great Lakes Regional Tournament,” which Buffalo State hosted virtually, when Team A fell one win shy of advancing to the Opening Round Championships.

More than 700 teams from universities and colleges across the country competed in this year’s regional tournaments, including 24 hosted by Buffalo State.

Together, the Buffalo State teams amassed wins against Towson University, Southern Methodist University, the University of Colorado, and Miami University.

Mock trial is an intercollegiate competition in which student-witnesses and student-attorneys prepare fictional court cases for a simulated trial. Each year, the American Mock Trial Association (AMTA), the governing body for collegiate mock trial, puts together a new case, including hundreds of pages of case law, affidavits, depositions, expert reports, evidence, and more that students must peruse in preparation. Each trial has two scoring judges who award points for the opening statement, direct examination, witness performances, cross-examination, and closing arguments.

Ben-Merre also serves on the AMTA Board of Directors and brings expertise from his participation as a student on Johns Hopkins University’s mock trial team. He has coached the Buffalo State team on and off for 10 years, many of those alongside Jon Lines, lecturer of political science and public administration, who founded the team.

This year featured a criminal case, State of Midlands v. Dakota Sutcliffe, in which the prosecution needed to prove that the defendant intentionally set a bar on fire, causing the death of a local firefighter.

“While the case itself is fictional, the simulated trial is based on the actual Federal Rules of Evidence,” Ben-Merre said. “During each trial, students are responsible for eliciting the facts in the case through nine possible witnesses, including investigators, forensic scientists, and various eyewitnesses, while arguing the law before judges, who are usually practicing attorneys themselves.”

Individual students are scored for their performances as witnesses and attorneys. Jerick Flores, a sophomore criminal justice major, and Lindsey Roth, a junior music major, were the top scoring attorneys of the weekend. Grace Gallagher, a junior psychology major, and Jillian Tung, a junior chemistry major, were the top scoring witnesses for Team A. Lindsey Parini, a freshman biology major, won an outstanding witness award for her portrayal of a firefighter.

“The students had been working tirelessly for many months now to be ready for this competition,” Ben-Merre said. “I know they are excited for next year, and I’m so excited to see them in action again.”